Over the last year I have achieved a number of milestones in my bell ringing pastime. This weekend I was home alone so joined the Four Shires Guild for their weekly practice which was held at the Church of St Mary the Virgin, Chipping Norton. 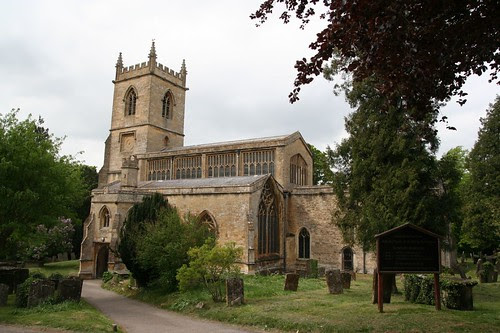 CC BY-NC 2.0
The weather was cold and threatened more snow which may explain why there were only 12 people there, then again closing the road at Moreton in Marsh may have deterred some ringers travelling from the Northwest, I almost turned back myself.

During 2010 I would like to develop enough skill to be able to ring at least one method on 8 bells so the Church of St Mary the Virgin with a nice, easy to ring, peal of 8 bells provided an opportunity to practice. While I rang cover for a number of methods I also got to ring inside and practice. The initial goal I set myself for 2010 was to ring Grandsire Triples and I managed a touch without any mistakes. Striking may have been a bit flaky but I made it through. This was encouraging but not a great milestone as I've been gradually been improving my competence at Grandsire Triples for a couple of months. However, I took the opportunity to try a plain course of Stedman Triples and was rather pleased with myself that I made it through two plain courses on the treble on what was my first ever attempt -- Milestone 1!

I was pretty content with the evening but when the final ring was going to be Plain Bob Major I figured I would give it a go. I can ring Plain Bob Minor and know, in theory, how it extends to Plain Bob Major but as I have already learnt moving from 6 to 8 bells is much harder than might be expected. I made it through a plain course on bell #3, my first ever attempt, again -- Milestone 2! I must admit that I am aware that I did make a mistake but recovered to reach the end.

A really enjoyable evenings ringing and my thanks to those who I rang with for their patience and support.
Posted by Roland at 15:02 1 comment: