A couple of weeks ago I downloaded a copy of "To Set Prometheus Free" (by A.C. Grayling) to my Kindle. I eventually got around to reading it while on a train journey last Saturday. I found the book interesting and it has made me consider my own position after the chapter about Bertrand Russell and his self-description as an 'agnostic'.

Despite the previous paragraph this post is not about Religion, Reason or Humanity but about coincidence. This morning I was sitting in Hillers Café enjoying a peaceful cup of coffee and started reading The Information (by James Gleick ). As I read the Prologue what should appear but a reference to Prometheus! 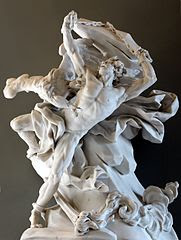 Who was Prometheus and why was he referenced in two such different contexts? I knew that this sort of this just nags away at me, so I'd better find out. While driving home I start to wrack my memory about Greek mythology and gradually it dawns on me that I've been confusing Prometheus and Polyphemus. I now recall reading about Polyphemus while studying Latin at school.

So I've done a little research and realise that I was aware of one reference to Prometheus and that was in the subtitle of the famous book:

Frankenstein,
or the Modern Prometheus
by  Mary Shelley

This alludes to the myth that tells how Prometheus makes man from clay and water. He is also known for the theft of fire from the gods for human use and his subsequent punishment by Zeus.

And the second reference in The Information? This is due to Aeschylus who makes Prometheus say:

"Yes, and numbers, too, chiefest of sciences, I invented for them (mankind), and the combining of letters, creative mother of the Muses' arts, with which to hold all things in memory."

Well that coincidence gave me pause for thought and now I feel happier knowing the linkage as well as adding a little to my meagre knowledge of Greek mythology.

p.s. a couple of hours after posting the above I turn on the TV and start watching an episode of Dark Matters and join at the point that they are discussing Frankenstein, by Mary Shelley!