We leave the rainforest and head West back over the Andes to our last stop in Ecuador at the beautiful colonial city of Cuenca. We stay at La Posada del Angel, a really nice colonial house in the the historic center of the city which is itself a Unesco World Heritage Site.

Cuenca is a large city but the historical centre where we spent our time is very pleasant. The local food was good, as was the beer. We visited one of the establishments that make and sell Panama hats. The process is interesting as is the huge variety of styles. I didn't feel any urge to buy one but the girls amongst us couldn't resist and bought quite different but equally attractive hats. 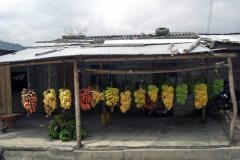 From Cuenca we head for Huaquillas where we are to cross the border into Peru. The scenery changes constantly as we work our way down towards the lowlands. Everywhere there are bananas, in the mountains there a lots of unusual varieties grown by subsistence farmers but the lowlands seem to be covered with banana plantations, mostly operated by familiar global brands such as Del Monte. The stalk which forms the fruit is covered in a plastic bag to protect the developing bananas from predators, which looks odd from a distance until you realise what it is.

Getting through the border is a simple enough process and we are done in under an hour.
Posted by Roland at 16:54