Reflection on my visit to Cambodia 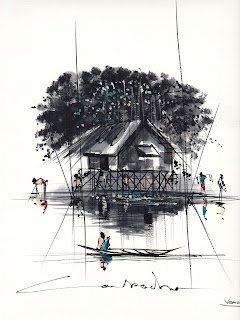 It is now several months since I visited Cambodia but recently I got around to buying a frame for some artwork I bought while I was there. This action prompted me to think back to when I bought the piece and what motivated me to buy it. With all due respect to the artist this is probably not a great painting it is however a piece of work that I like and a reminder of the events that led to its creation.

In the years following the U.S. withdrawal of troops from Vietnam in 1975 the Khmer Rouge (Red Cambodians), led by Pol Pot, effectively took control of Cambodia which was renamed the Democratic Republic of Kampuchea. A very dark period dawned and the regime set about systematically dismantling the old ways and implementing an extreme form of communism based on peasant powered agriculture. Staples of society such as health care, education, cities, money, religion, families were not tolerated.

So how does a single painting spark these memories? Well, among the plethora of forbidden activities were cultural activities which included art, literature, music… Among the literally millions (estimated ~2million +/- 1 million) of victims of this genocide were pretty much all the artists which destroyed not only the lives of individual artists but the teachers, role models and reservoir of local traditions.

While in Siem Reap I was asked if I was interested in a visit to the circus, at first I wasn't that enthused but my interest was piqued when it was suggested that circus skills were another example of activities that were banned by the Khmer Rouge and whose practitioners had been killed. A short tuk-tuk ride west of where I am staying is Phare, The Cambodian Circus.

It had been a long time since I had been to a circus and had no idea what to expect… I may have started out rather unenthusiastic but after sitting through the performance I was a convert, the entertainment value was outstanding. There were certainly some familiar circus skills displayed as part of the performance but the blend of music, dance, story telling, humour and athleticism combined to give tremendous entertainment.

The common factor between these two examples of Cambodian culture, i.e. painting and circus, is the resurgence of interest and practice in these activities that were almost completely eradicated by the Khmer Rouge regime. More than a simple resurrection of the original practices modern Cambodians have sought help from their neighbours to regain some of the old skills but have also invigorated the old with more modern and experimental techniques. The results may as yet lack polish but are very exciting and even inspire admiration in artistic philistines like myself.

The painting that prompted this post was sold to me by the artist at Preah Ko, a small temple about 15 kilometers south-east of the Angkor temple.