During our visit in Budapest we stayed at the Carat Boutique Hotel, this turned out to be a good choice, a nice hotel, conveniently situated in Pest half of Budapest, a short walk from Deák Ferenc square.

Lynn always likes to plan her trips and on the agenda were pretty much all of the major highlights in our guidebook (Budapest, AA CityPack). The weather was superb so we will make the most of it spending our time outdoors.
To get an overview of the city we took a walking tour with Budapest Tours, this was a half day tour and only covered Pest (there was another tour for Buda). The walk started near the tourist office at Deák Ferenc Metro and ended at the Great Market Hall but we continued on to Ráday utca, a street with lots of nice restaurants, for lunch. Although I have visited Budapest a couple times before I found the couple of hours for the trip to be both informative and useful.

Over the few days of our trip we revisited some of the places we had briefly visited on the walking tour. The Terror House Museum is related to two recent periods in Hungarian history, the fascist and communist regimes. During the Second World War the building was the headquarters of national socialist Arrow Cross Party. After the war it was occupied by Hungary's State Security Agency (AVO). It's name is well deserved. It was well worth the hours we spent there, fascinating! 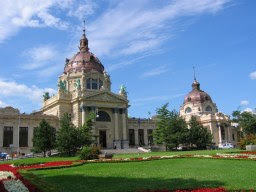 Széchenyi thermal bath
There was one other activity high of Lynn's list, a visit to a spa. There are lots to choose from but the list is reduced when the constraint that it must be a traditional outdoor one is applied, we settled on Széchenyi Gyógyfürdo Uszodája in City Park.
While Lynn luxuriated at the spa I spent the time exploring City Park taking in Vajdahunyad Castle and a quiet bar.
Also on the list was Nagy Zsinagoga, The Great Synagogue (the largest Synagogue in Europe). The only item of interest to me was The Memorial of the Hungarian Jewish Martyrs in the rear courtyard. Lynn found much more to fascinate her so once again I sought out a nearby cafe to chill out and do a little people watching.
We managed to find some really good food, not too difficult a task, at reasonable prices. On some occasions a single portion was enough for both of us.
We will have to visit again one day, I'm sure Lynn would enjoy exploring Buda. Budapest has changed a lot since my first visit in February 1997, in many ways the changes are for the better, but I'm afraid that it is losing some of its original unique charms and becoming a typical northern European city. The last time I was in Buda I felt that it had retained more of its charm than Pest, that is why I'll have to bring Lynn back -- to see Buda.
Posted by Roland at 16:18