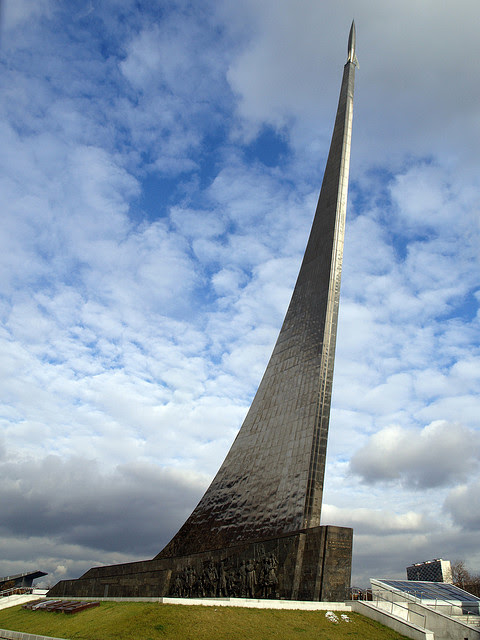 by: jaime.silva
Taking just a little more than 7 hours, my train journey from St Petersburg is a short, comfortable and uneventful journey, the only downside being that I arrive at Moscow Oktiabrskaia station at 05:15. Someone was waiting for me at the station and took me to my hotel. Along the way we passed a dramatic sight which I missed the opportunity to photograph. The sun was just rising, the sky was red and Monument to the Conquerors of Space looked spectacular.

No hotel problems in Moscow, I stayed at the very pleasant Hotel Zarya north of central Moscow but just a few stops away on the Metro. I was able to grab a couple of hours sleep before breakfast giving me a full day to start exploring Moscow.

The nearest metro station was Vladykino (Владыкино). I bought tickets for 5 rides for only 150RUB, and one ticket takes you anywhere on the Moscow metro, one price, no zones, the best value item in Moscow. I take a simple journey with no changes to Borovitskaya (Боровицкая) which I later discovered is geographically located in the very centre of Moscow. As you emerge from the station on to Mokhovaya Street the towers of the Kremlin (Моско́вский Кремль) are impossible to miss as you look east.

Although the Kremlin is just a short walk east of the station I decide to head south for a bit to see if I find anything interesting in the knowledge that I can always return to the Kremlin. I hadn't walked far when the golden dome of the Cathedral of Christ the Saviour (Храм Христа Спасителя) came into view. I spent some time walking around the grounds of this spectacular church before taking the footbridge across the Moskva River (река Москва) to an island -- Balchug -- …

After wandering most of the day the sky became increasingly threatening so I decided to make my way towards the public entrance to the Kremlin. The queue to enter suggested that there were likely to be was more people inside than I wanted to deal with, and I do hate queueing. So I continued walking through the Alexander Gardens to Manezhnaya Square and then into Red Square (Красная площадь). While Red Square is a large space, it is not as big as I had expected based on all the footage I had viewed over the years. While in the square there was a cloud burst and a torrential downpour, the first real rain I'd seen in my weeks of travelling.

I took the rain as a cue to visit GUM (ГУМ) and sit out the storm with a coffee. Like all the places I'd seen in central Moscow, GUM was pretty amazing, and seemingly a world away from images formed during the Soviet era!

My second day started out much like the first, this time I was planning to visit some of the metro stations with a view to their architecture rather than location. The first station I visited was Arbatskaya since it was one of the stations that intersected  9  from Vladykino. I visited several other stations including Oktyabrskaya and Mendeleevskaya.

I managed to spend some time in Gorky Park (Moscow) and nearby Fallen Monument Park. Unfortunately there was extensive landscaping work taking place in Fallen Monument Park so many of the iconic statues were not to be seen, still worth a visit though.

I continued my Drunkard's Walk and as the sun was setting I found myself in the Tverskoy District, north of central Moscow. Time to get the metro back to my hotel.

Two days is certainly not long enough to see any significant fraction of what Moscow has to offer. That said, I did enjoy my time here and would certainly recommend Moscow as a city to visit. Much more interesting than one-dimensional Leningrad!

I did experience one wrinkle in my travel arrangements while in Moscow. When I booked my train I was scheduled to leave Moscow from Yaroslavsky station, the western terminus of the Trans-Siberian Railway. When I collected my tickets it turned out that I would actually be leaving on TR #60 from Kazansky station (Казанский вокзал‎)! I faffed about a bit at Kazansky trying to find the platform but no great problem.